Will eating chicken reduce your risk of breast cancer?

Recent reports suggested eating chicken could reduce the risk of breast cancer. In the study, those who ate chicken were at lower risk – when compared to women who ate large quantities of red meat.
Rosemary Stanton | UNSW Newsroom

Research Checks interrogate newly published studies and how they’re reported in the media. The analysis is undertaken by one or more academics not involved with the study, and reviewed by another, to make sure it’s accurate.

You might have seen headlines recently claiming eating chicken reduces a person’s risk of breast cancer.

These reports were based on a new study published in the International Journal of Cancer this month which examined the links between breast cancer and consumption of red meat and poultry.

It found women who ate chicken had a lower risk of developing breast cancer than those who ate red meat.

As with all observational studies, this research cannot show cause and effect. The correlation between eating chicken and a lower risk of breast cancer may have more to do with consuming large quantities of red meat than it does with chicken having any protective qualities.

Over almost eight years, researchers followed 42,000 women aged 35-74 involved in the Sister Study in Puerto Rico and the United States. The Sister Study, funded by the US National Institutes of Health, is currently tracking a large cohort of women with view to better understanding the causes of breast cancer.

Some 1,536 cases of invasive breast cancer were diagnosed among the cohort over the eight-year period. The researchers considered this alongside information on participants’ meat consumption habits, gathered through a series of standardised questionnaires.

The effects were particularly striking in post-menopausal women.

Notably, neither the red meat group nor the poultry group necessarily ate only one or the other. So it’s likely women eating a lot of poultry were eating less red meat, while women who ate less poultry included more red meat in their diets.

The researchers predicted breast cancer risk would be reduced even further if the women who ate a large amount of red meat switched to poultry.

They accounted for many confounding factors including obesity, age, income, education level, total energy intake, percentage of energy from fat, consumption of vegetables, fruit and dairy products, how long the women breast-fed their infants and their use of hormone therapy.

Even considering all these factors, there was still a significant relationship between invasive breast cancer and a high consumption of red meat.

Unfortunately, the study did not identify any women who avoided all meat, so it doesn’t tell us if a vegetarian diet would have further reduced the risk of breast cancer.

One large British report found a small increase in breast cancer with processed meat, but not fresh red meat.

Another major review confirmed the processed meat results and found only a very small increase in breast cancer related to fresh red meat.

Other studies have looked at poultry consumption and breast cancer. None have found significant correlations with breast or other cancers. Several have found inverse relationships similar to those seen in this study. 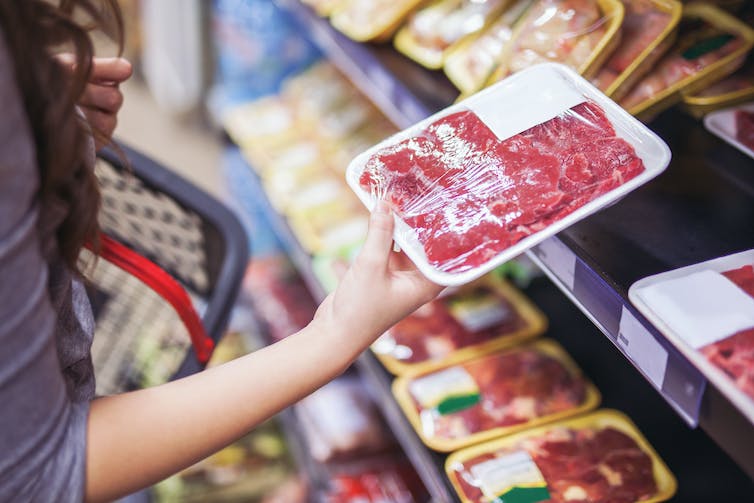 A high consumption of red meat, particularly processed red meat, has been associated with increased cancer risk. Image from shutterstock.com

Red meat has more definite links with the risk of certain cancers. The World Cancer Research Foundation recommends limiting red meat (beef, lamb, pork, goat) to reduce the risk of colorectal cancer. At this stage, it has not extended this advice to breast cancer.

Health concerns about red meat intake also lie in its links to heart disease, which are supported by research evidence.

It is useful to look at the quantity of meat consumed by those with the lowest incidence of breast cancer in this study. It was small – no more than 340g of red meat a week, or equivalent to about two average-sized red meat portions a week.

By contrast, the highest incidence of breast cancer occurred in those with a weekly consumption of 775g or more.

The greatest benefit, according to the researchers’ modelling, appeared in women who substituted lean poultry for red meat.

Adding a small amount of red meat to a plant-based diet is unlikely to cause health problems. In modest quantities, red meat can actually make a valuable nutritional contribution, adding iron, protein and vitamin B12.

But problems with red meat relate to the quantity consumed – more is not better.

So while this new research doesn’t provide enough evidence to suggest eating chicken is protective against breast cancer, women who currently consume a lot of red meat may find it useful to know poultry is an acceptable alternative.

The analysis presents a fair, balanced and accurate assessment of the study. In this study, the researchers looked at the impact of consumption of different types of red meat and white meat, and the way the meats were cooked, on the rates of breast cancer.