The robots helping sick kids 'teleport' to the classroom

Most school students are back in school after a tumultuous school year, but remote learning – and social isolation – is an ongoing reality for thousands of sick children around the country.
Sherry Landow | UNSW Newsroom Children missing school because of serious illnesses are getting a chance to be seen, heard and even move in their classroom again with the help of a telepresence robot service.

The robots – which look like electronic tablets on a stem with wheels – can be directed to move around the classroom or playground at the students’ will via their electronic device.

Children can activate the robot remotely and move around the school as though they are really there.

“Unlike other video conferencing tools like Zoom or Skype, telepresence robots ‘teleport’ students with serious injury or illness into their classrooms,” says Ms Sarah Ellis, a research fellow at UNSW Sydney and the Kids Cancer Centre at Sydney Children's Hospital.

“The robots give children a physical presence in the classroom from their home or hospital.”

Ms Ellis is part of a team of researchers from UNSW, University of Southern Queensland and MissingSchool currently investigating the social, emotional and mental benefits of the pilot robot service, called ‘See-Be’.

The See-Be robot pilot was developed in 2017 by the not-for-profit organisation MissingSchool with the help of St.George Foundation and offered to students across Australia from Kindergarten to Year 12.

The UNSW research findings – which are set to be published next year – will explore the educational and social disadvantages faced by sick children and the effectiveness of the robots as an early intervention.

“Around 60,000 kids and teens in Australia routinely miss school each year due to illness according to MissingSchool,” says Ms Ellis, who is a principal investigator of this study. “Some of these children are missing months, terms or even years of school due to treatment, ongoing illness, or convalescing at home.

“Prolonged absences from school leave children with a chronic illness feeling ‘out of the loop’. Previous research by our team has shown that missing school not only affects their academic learning, but also their social and emotional development and wellbeing.

“Technologies like the robots offer a new and exciting way to bridge the gaps between hospital, home and the school community, that may help reduce or prevent the negative impacts of missing school.” 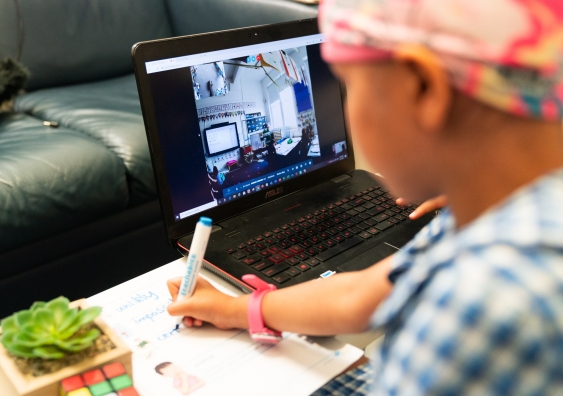 Students can control their robots remotely via a laptop or other electronic device. Photo: The Story Mill.

When video alone doesn’t cut it

Video teleconference tools helped many Australian school students stay connected during COVID-19, but the physicality of the robot can be more powerful than video alone.

“Unlike other video conferencing technology, the students actually have control of the robot – they can exercise their agency moving the robot around the classroom space,” says Ms Megan Gilmour, CEO and co-founder of MissingSchool.

Ms Gilmour is no stranger to the challenges faced by sick children missing school. Her son, Darcy, needed to have a bone marrow transplant at the age of 10.

During her son’s treatment, Ms Gilmour met two other mothers whose children were going through the same experience. They decided to start MissingSchool together to help other sick children and advocate for wider systemic change.

“It's always been about policy changes for us,” says Ms Gilmour. “There's an abundance of evidence on the educational and social barriers faced by sick children but we need more evidence-driven interventions and solutions.” 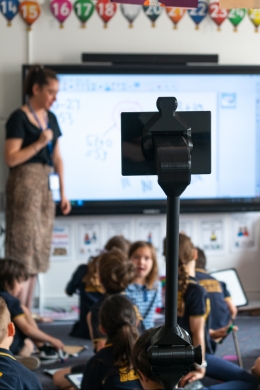 The telepresence robots can help bridge the gaps between hospital, home and school. Photo: The Story Mill.

In 2015, MissingSchool commissioned and co-wrote an Australian-first report on the disadvantages faced by sick kids missing school, which was released at Parliament House.

The collaborative research project will continue to build on this national conversation using data from the pilot telepresence robot service.

“The collaboration will build on our profile of research in social outcomes and connectivity for children with cancer to investigate a really innovative, kid-friendly way of keeping sick kids connected to their school and community.”

“Up until now, a lot of the evidence on interventions has been anecdotal,” says Ms Gilmour. “There is little formal research on the use of telepresence robots in this context, which is why the UNSW research is so important.

“Sick children missing school is an issue that everybody needs to be involved in. We can't solve it on our own, but we can together.”

Schools, parents and students interested in getting involved with the telepresence robot program can register their interest via the MissingSchool website.