A change in climate may have triggered the decline and collapse of the Mayan city of Mayapán in the 15th century.
Stanley Serafin | UNSW Newsroom The city of Mayapán was the largest Mayan city from approximately 1200 to 1450 AD. It was an important political, economic and religious centre, and the capital of a large state that controlled much of northwestern Yucatan in present day Mexico.

When the Spanish arrived in the early 1500s, Mayapán was fondly remembered and Mayans proudly claimed descent from its former citizens. But inherent instability meant that it was doomed to fail.

Or so the story went. This narrative has influenced views of this important city, and this period of Mayan civilisation more broadly, for some time.

In a new study, my collaborators and I show that warfare, collapse and abandonment at Mayapán were not inevitable. Instead, they were exacerbated by drought.

Traces of a massacre

Experts from a wide range of fields worked together to piece together this story. The team included included archaeologists, biological anthropologists, geologists and paleoclimatologists.

Archaeologists led by Carlos Peraza Lope of the Instituto Nacional de Antropología e Historia of Mexico and Marilyn Masson of the University at Albany – State University of New York have been investigating the ruins of Mayapán intensively since 1996 and 1999, respectively. Intermittent work has been going on at the site since the 1950s. 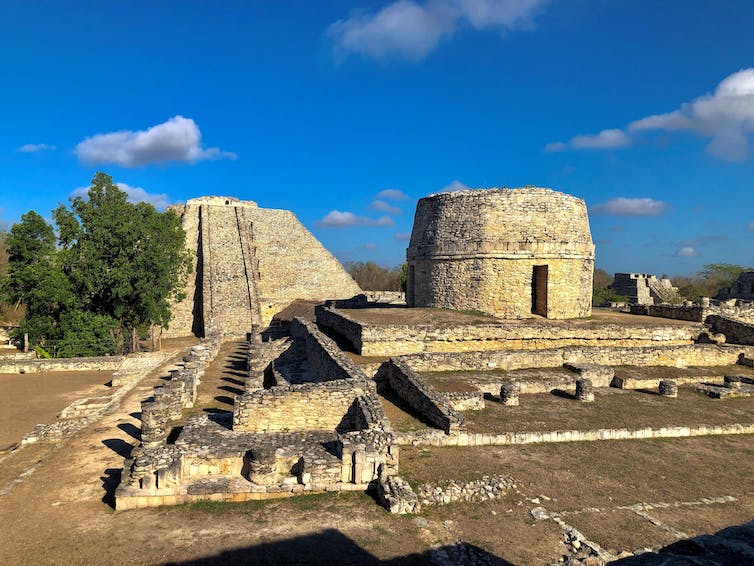 Archaeologists have been investigating the site of Mayapán since the 1950s. Photo: Bradley Russell, author provided.

Researchers have long suspected that Mayapán collapsed violently, based on early colonial documents. These records describe a revolt led by the noble Xiu family that resulted in the massacre of the ruling Cocom family.

When archaeologists from the Carnegie Institute of Washington started to investigate the site in the 1950s, they were not surprised to find buried bodies that had not been given the usual respectful funerary treatment.

I am a bioarchaeologist, which means my job was to look for evidence of trauma in the skeletons that may have contributed to the deaths of these individuals. This evidence would support the idea of a violent collapse of the city.

Most burials lacked evidence of violence. However, some exhibited injuries such as an embedded arrowheads, stabbing wounds or blunt force trauma to the skull.

The signs of violence were concentrated in important contexts at the site and found in association with evidence of desecration and deliberate destruction. It seems some of the site’s own elite inhabitants had been the targets of violence.

To find out when this conflict occurred, and how it related to changes in climate, required a large number of high-precision radiocarbon dates and paleoclimate data from the vicinity of Mayapán.

As a result, we now have more radiocarbon dating information for Mayapán than for any other Mayan site. 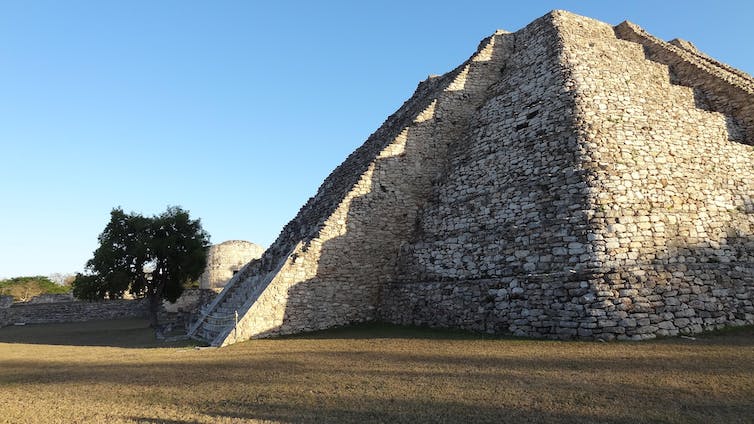 The temple of Kukulkan, dedicated to the feathered serpent deity, was at the heart of Mayapán’s most sacred precinct. Photo: Susan Milbrath, author provided.

Paleoclimate data, meanwhile, was obtained from a stalagmite recovered from a cave directly beneath the site’s principal temple pyramid, which was dedicated to the feathered serpent deity Kukulkan.

These analyses revealed that episodes of violence became more common later in the site’s history, corresponding with evidence of drought that began in the late 1300s and continued into the 1400s.

One mass grave in particular, recovered in Mayapán’s most sacred precinct at the foot of the temple of Kukulkan, appeared to date to around the time of the city’s purported collapse in the mid-1400s. Remarkably, this was confirmed through radiocarbon analyses, corroborating historical accounts of the site’s violent overthrow at this time.

But the story does not end there.

Radiocarbon dating also provided the surprising result that Mayapán’s population started falling after approximately 1350 AD. Indeed, the city was already largely abandoned by the time of its famous collapse in the mid 1400s.

It may be that as drought continued through the late 1300s, the residents of Mayapán started voting with their feet.

After Mayapán’s fall, the city’s former inhabitants returned to their ancestral homelands in different parts of the Yucatan Peninsula. By the time of Spanish contact in the early 1500s, the peninsula was divided into a number of independent provinces, some of which were thriving.

Although from a vastly different time and place, our study contributes to current efforts to combat global climate change.

When environmental conditions were favourable, populations expanded. But when conditions deteriorated, this put pressure on social and political institutions.

Mayapán’s people migrated away from the city to cope with the change in climate. While migration may be less of a solution in the face of today’s climate change, due to global population levels, climate refugees are expected to rapidly grow in number without significant action by governments and citizenry alike.

To address big questions such as this requires a level of multidisciplinary collaboration that is difficult to achieve but essential.

Importantly, local Yucatecan Mayan communities have been integral to this process. Inhabitants of the equally ancient town of Telchaquillo, located just outside Mayapán, have contributed to this work in innumerable ways, including excavation, artifact cleaning, processing and analysis.